See If You Qualify

Learn immediately if your late payment(s) qualify to file a mechanic’s lien and the documents required by Texas Lien Laws. Start by answering these questions…IT’S FREE.

Painless and straightforward mechanic’s lien services in Texas. Prepare, review, edit and approve any document BEFORE you pay—all in less than 15 minutes.

Easy to use construction lien service for preparing and filing documents from your computer or mobile device – anytime, anywhere.

Everyone eligible in the construction industry can now afford to file a mechanic’s lien on a property in Texas, even for small claims.

What Our Customers Think

This process was simple.

I was very apprehensive, you made it user-friendly.

First time I’ve had to file…

…you made it simple by including notary and filing services. Thank you!

Super easy way to assist in your collections.

Thrilled with the Process

Oh wow! You guys made this process so easy!

You made something that has been very stressful, easy to take care of and very time efficient. Thank you so much.

Simple and direct. I love this service.

With Texas Easy Lien, prepare your own construction lien and bond claim documents electronically without hiring a lawyer or finding a notary. Just answer a few questions about your project, review and approve the information provided, complete payment, and that’s it! Notarize and file your mechanic’s lien documents immediately after, all online.

Select the Document You Need

Answer a few questions related to your project. Verify the information on your mechanic’s lien document is correct using the PREVIEW DOCUMENT option and change or approve the draft as needed.

Approve the Documents Before You Pay

Once you approve your mechanic’s lien Texas document draft, you can add electronic notary and filing services from your cart. After checkout, access your secure private Dashboard and continue with the filing process.
Print or download your mechanic’s lien document right away - no waiting.

Complete the Process in Minutes

Notarize and file your mechanic’s lien Texas documents immediately from your Dashboard. Can’t file online? We provide mailing and in-person instructions with every document purchased. Also, benefit from unlimited printing of your mechanic’s lien documents to mail them to every recipient required at no extra cost.

Send a pre-lien notice for each month that goes unpaid. (Not required for general contractors )

File a mechanic’s lien against a property in Texas.(All types of contractors and suppliers)

File a bond claim against a public construction project in Texas.(For subcontractors and sub-subcontractors owed on State or City projects)

Remove a mechanic’s lien filed on a property. (For contractors, suppliers AND property owners )

It takes 15 minutes, and you get mechanic’s lien documents NOW– the alternative is hiring a lawyer, usually costing more than $1,000.

Who Can Use Texas Easy Lien?

Companies or individuals may pursue a mechanic’s lien or bond claim, including

Companies or individuals may pursue a lien or bond claim, including

Not sure what to do?

Find all the information you need to know regarding your construction lien rights in Texas.

What is a Mechanic’s Lien Affidavit?

A Mechanic’s Lien Affidavit is a document that asserts a lien against property for your work when you have not been paid. It is often the best legal tool that contractors, subcontractors and suppliers have to protect themselves.

Depending on where you are located, a Mechanic’s Lien Affidavit can also be referred as “Project Lien”, “Construction Lien” and even “Contractor Lien”.

What do I need to file a construction lien?

To prepare a lien affidavit, you will need the general information of the project and your contract. Below is a list of most of the information that is most needed to file a lien.

• Project Information: Owner, name of project, common address (or legal property description), county where the project is located.
• For Subcontractors: Name (or company name) and mailing address of the General (Prime) Contractor.
• For Sub-subcontractors: It is not required but preferred to have the name and mailing address of all Subcontractors involved in the contract chain.
• Work: Invoice dates, description of the unpaid work performed and the amount owed per each individual month.

Who can file a Construction Lien?

Any person or company who provides labor, materials, equipment and supplies to a project and has not received payment for the work performed is entitled to file a lien on a property.
Note: Landscapers, Landscape materials suppliers and those who furnishes labor or materials for, the demolition of a structure on real property, must have a written contract to file a lien.

What is a Lien Affidavit?

A Mechanic’s Lien Affidavit is a document that asserts a lien against property for your work when you have not been paid. It is often the best legal tool that contractors, subcontractors and suppliers have to protect themselves.

Depending on where you are located, a Mechanic’s Lien Affidavit can also be referred as “Project Lien”, “Construction Lien” and even “Contractor Lien”.

How are the dates and deadlines calculated1B?

This is an important issue that is often misunderstood. The dates and deadlines related for lien and bond claims are based off the month and year in which the work was actually performed. The invoice date and your personal accounting methods are irrelevant.
The important issues are when the work was actually performed and the value of the work for each individual month.
For example, assume that ABC Painting, Inc., completed a three-month painting project that lasted from January to March. ABC Painting would need to separately identify the value of the work performed for January, February, and March. It would not matter if ABC only issued one invoice at the end of the project.

Is a lien the same as a bond?

They are similar, but not the same. On a private project where a governmental entity (i.e., state, county, city, school district, etc.) is not involved, an unpaid general contractor, subcontractor, or supplier can file a lien against the property. On a public works project where a governmental entity is involved, the same contractors or suppliers (but not the general contractor) would file a bond claim against the surety which is also known as a bonding company.

Both documents seek payment for unpaid work and both documents require similar notice and filing requirements. A bond can be thought of as money being held and guaranteed by an insurance company. A lien is a claim against the actual property where the unpaid work was performed.

Mechanic’s liens and bonds claims get filed when contractors work on a project but don’t get paid what they’re owed. It’s too common in Texas. Making things worse, Texas construction lien laws are notoriously complex, and now, we found a solution.

Mechanic’s liens and bonds claims get filed when contractors work on a project but don’t get paid what they’re owed. It’s too common in Texas. Making things worse, Texas construction lien laws are notoriously complex, and now, we found a solution. 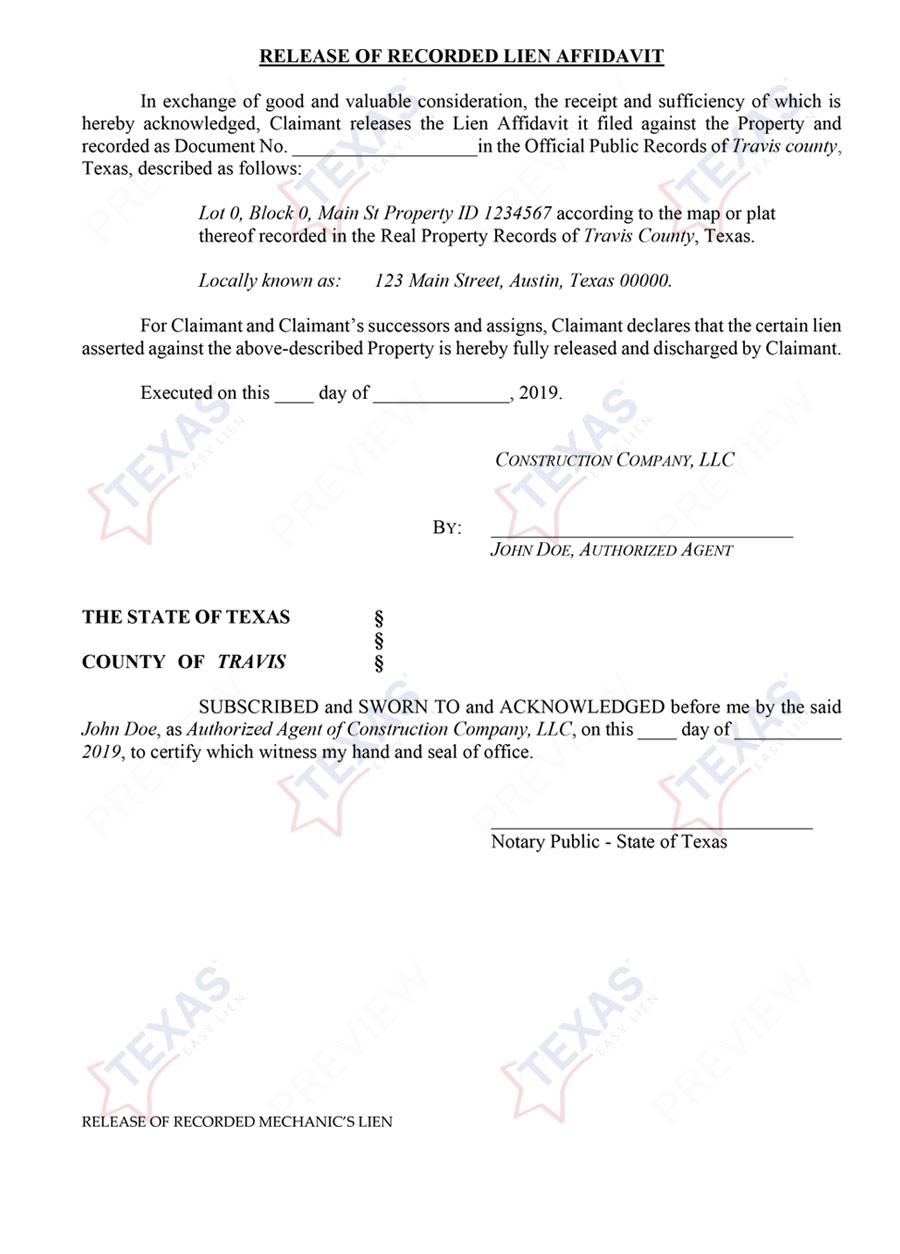 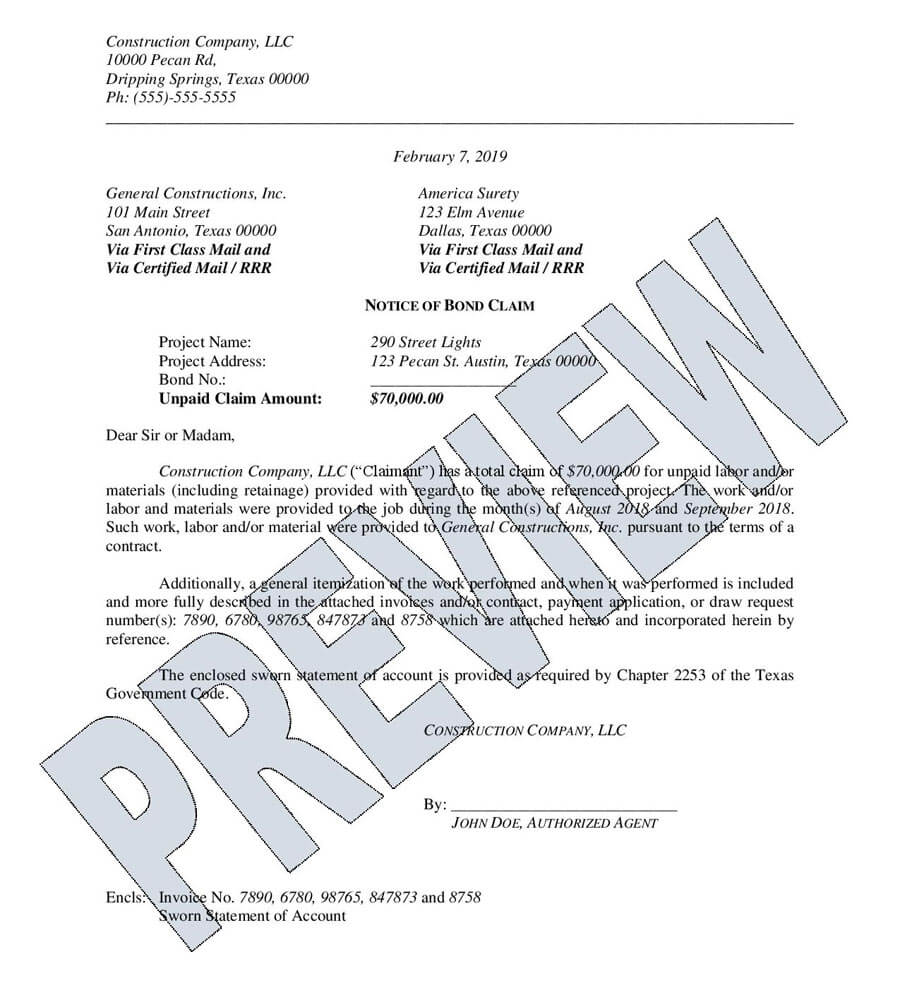 Please send us your contact details and a message. It shouldn’t take long to hear back from us.